Color voices is an interactive audio installation created on the occasion of Cersaie 2018 to communicate the innovation of the new large format printing technology on ceramic slabs. The installation turns the sensory paradigm of color upside down: sound becomes the main instrument for communicating an image, transforming each color into a musical poem.
An image generated with the software Max / MSP put the focus both on the large format, given by the 9sqm printing surface, and on the color rendering, concentrating in the central part of the surface a single colored portion of the image, surrounded by a black and white print. The central portion of the image is made interactive thanks to the use of a MultiTouch capacitive film placed on the back of the slab, able to detect the contact on the opposite surface.

When the user moves along the surface, he can listen to harmonies and melodies generated by the Max / MSP object-oriented programming language, able to translate the data, obtained through the TUIO protocol, thanks to two new objects, TouchColor and ColorDetection, which use the JavaScript functionality within Max / MSP. 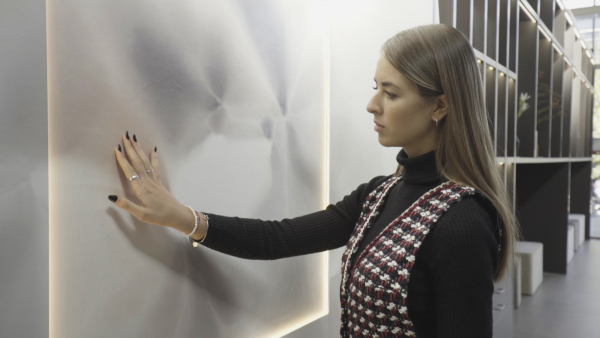 Like a voice, the tone and tonality of each color are designed to express the unique personality of each color and its shades, which influence the sound tone according to the chromatic brightness. The compositions that arise from each interaction change with the nuances of color touched, the type of contact on the plate, whether continuous or punctual, and the number of people interacting on it. The plate can then be played by multiple users simultaneously, giving the possibility of generating multiple sounds and unpredictable compositions. To limit the dissonances that can arise from different harmonizations, all the notes have been limited to intervals that make up a major pentatonic scale in E. (eliminating the IV and VII degree). 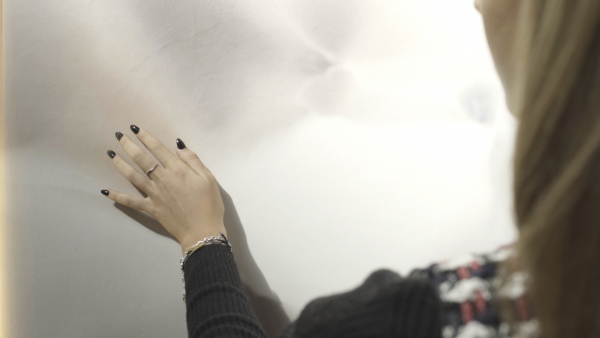 To give the possibility to multiple users to play the same color, the sounds are managed by ten-item polyphonic samplers (1 voice per touch, for a total of 70 voices) thus making each touch independent. The sounds have been positioned spatially maintaining the exact color arrangement: the immersive effect obtained is distributed on an audio system consisting of four speakers positioned at the four corners of the installation. Color Voices creates a relationship starting from a simple contact, in which interaction is an instinctive exchange between human being and color, a personal connection where the user is free to discover atmospheres that blend sound and color.