Multiverse is an audiovisual installation that explores the evolution of infinite possible universes through the use of generative graphics and sounds that exploit the theorization of the existence of the so-called multiverse: a system composed of an infinite number of universes that coexist parallel outside our space-time.

The installation lays its foundations precisely on this concept and, through the creation of a succession of digital paintings generated in real time, attempts to represent the eternal birth and death of infinite parallel universes. 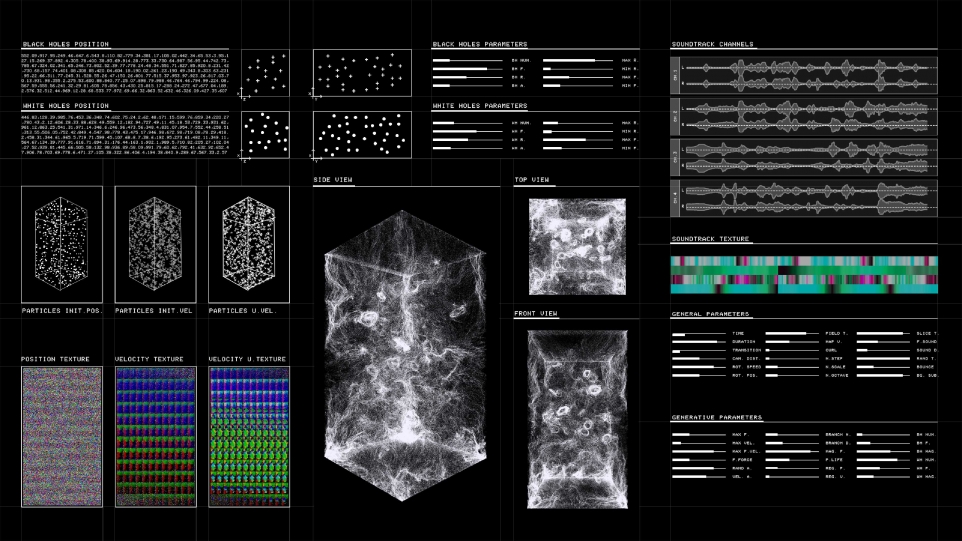 The multiverse theory of Lee Smolin, an American theoretical physicist, helped us to create a scientifically coherent narrative context. According to this theory our universe is only one in a much larger cosmos (the Multiverse), a member of a growing community of universes, each one being born from the collapse following the formation of a black hole. During this event, the values of certain parameters of the physical laws are reprogrammed and slightly modified. This process leads to a revolutionary image of a Multiverse where universes with more black holes have more descendants. Smolin concludes that because of this “Cosmological Natural Selection” our universe is in this particular configuration and was born following precisely this mechanism; the existence of the earth and of ourselves, therefore, is partly causal, but at the same time the result of an infinite evolution of other universes. Hospitality to life in our universe is seen as a consequence of a self-organized process. 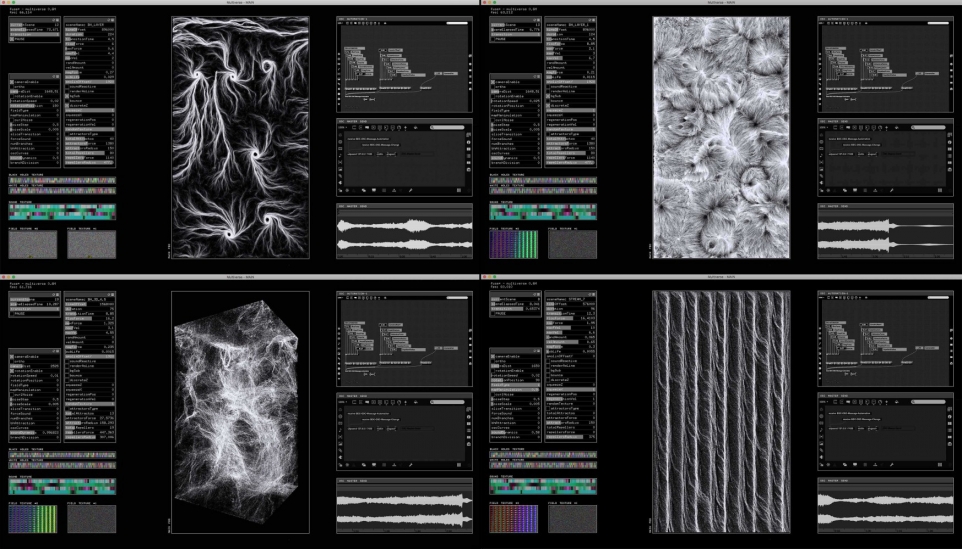 Multiverse aims to create a relationship of great intimacy with the viewer while wanting to keep the hierarchies between the two main characters. On one side the ephemeral and vulnerable human figure and on the other side something extremely vast and incomprehensible, almost impenetrable, such as the universe.

In Multiverse, the role of "creator" belongs to the software, an application developed in openFrameworks that manages the generation of the various scenes that are displayed and that interacts with Ableton Live and Max/MSP for the production of the soundtrack through a generative sound system. Each digital picture represents a stage in the evolutionary path of a multiverse which evolves through a series of key passages theorized by Smolin. In particular, we started from the assumption that the gravitational collapse of matter does not end in a singularity of a black hole but that it gives life to a so-called child-universe. While the physical laws of simulation remain the same every time these events occur, there are small random changes of the values of the parameters of physical laws during the bounce leading to the origin of a new universe that has slight differences in its fundamental properties.

The particle simulations that are shown to the viewer are born through the creation of an ad-hoc simulated environment that allowed us to experiment with different motion rules and the relationship with the digital environment. Particularly, the particles react with each other and with the surrounding space, changing the information perceived by modifying a vector field that stores the values within a voxel space. The strategy involved the massive use of shader programs that maximize the hardware performance and optimize the graphics pipeline on the GPU. 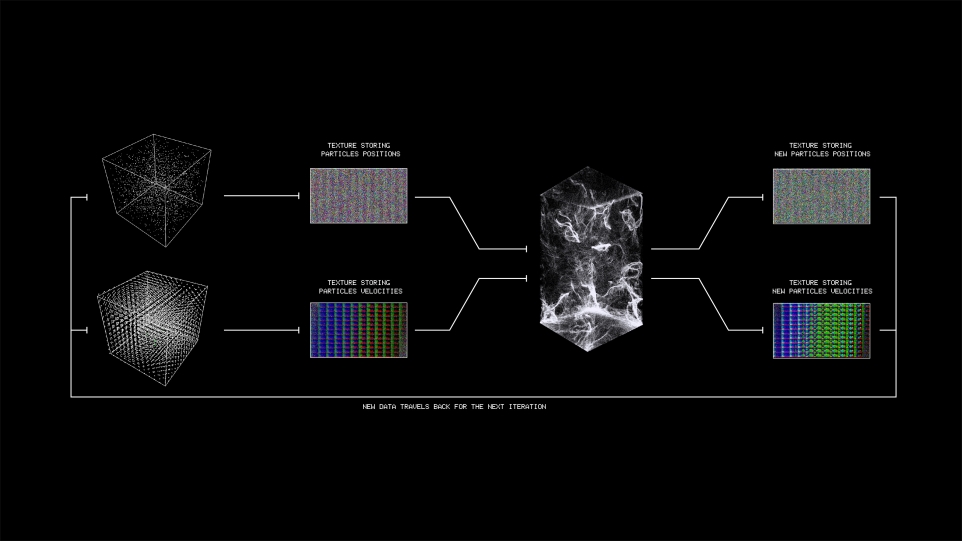 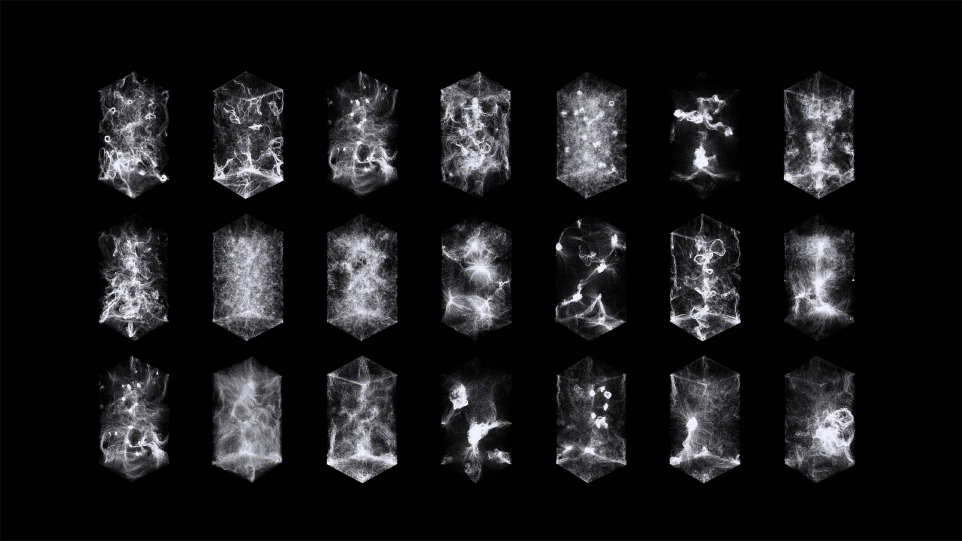 Each scene, however, does not repeat itself in the same form. After thirty minutes the previous sequence of steps carrying the genetic information of the last passage triggers an evolutionary transition and the exploration of new possibilities through the modification of the so-called fundamental parameters. The generative nature of the system allows the creation of infinite variations that cyclically follow one another during the life of the artwork.
The installation consists of a vertical projection of 7.5 meters high and two large mirroring surfaces that generate an infinite reflection of the image towards the sky and the center of the earth. The goal is to increase the perception of reality by giving the impression that the installation is going beyond the physical walls projecting itself into a boundless space. 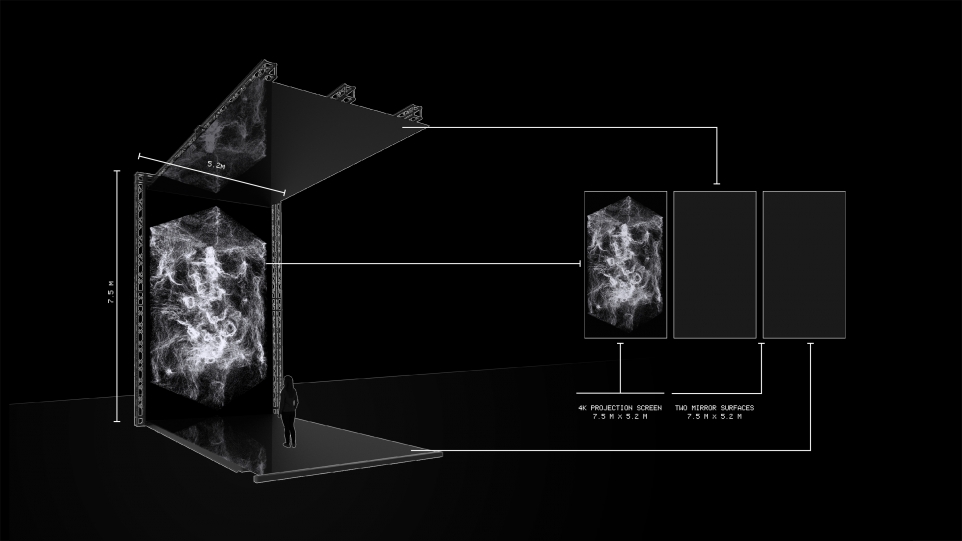 The work has been staged for the first time in BDC28, a deconsecrated church in the historic center of Parma. Borgo delle Colonne 28 is the BDC headquarter, a center dedicated to contemporary art founded by Lucia Bonanni and Mauro Del Rio that played a significant role in the project by co-producing the installation.

MULTIVERSE .pan
Multiverse .pan is an adaptation with mirror surfaces placed on the sides. This version was premiered at Signal Festival in October 2019 inside the wonderful Mirror Chapel in the hearth of Prague. The installation recorded more than 9000 visitors in just 4 days.

In Novembre 2019, Multiverse was part of the prestigious 'AS-Helix: Art and Science Integration in the Age of Artificial Intelligence' exhibition at the National Museum of China in Beijing, the second most visited museum in the world. The exhibition examined the topic by showing more than 120 pieces by artists from across the world such as onformative, Refik Anadol Studio, teamLab, Tobias Gremmler, and many others. On that occasion, Multiverse won the ‘Wu Guanzhong Art and Science Innovation Award’ assigned by Tsinghua University.