Over the past ten years, fuse* worked to imagine new modes of expression at the confluence of art, science, and technological research, creating new languages to reveal our human nature and create unique experiences that give audiences a sense of common ground and participation. Everything in Existence is the first solo exhibition by fuse* and traces a line that highlights the evolution of the studio’s practice, presenting four multimedia installations that invite audiences to experience different perceptions of reality and new perspectives that are designed to remind us that we are all part of something bigger. The exhibition is inspired by the notion of interconnectedness, the belief that we are all part of everything in existence.

The works in the exhibition are also united by the fact that they are generated by software that is processing data in real time. The data may be derived from interaction with the viewer (Snowfall), from social networks (Amygdala), from sound (Clepsydra) or from the software itself (Multiverse). Using this generative technique, fuse* creates “living” art that constantly renews itself and changes before one’s eyes, rewarding prolonged viewing and repeat visits from the spectator. This interplay between the human hand of the artist or the participant and the invisible inner-workings of the algorithmic software, which ultimately creates the artworks, parallels the relationship between humans, in all of their vulnerability, and the mysterious, extremely vast, and incomprehensible forces that push us towards the unknown, beyond the limits of the known world. Everything in Existence premiered at ARTECHOUSE in Washington DC from January 17th till March 10th 2019. 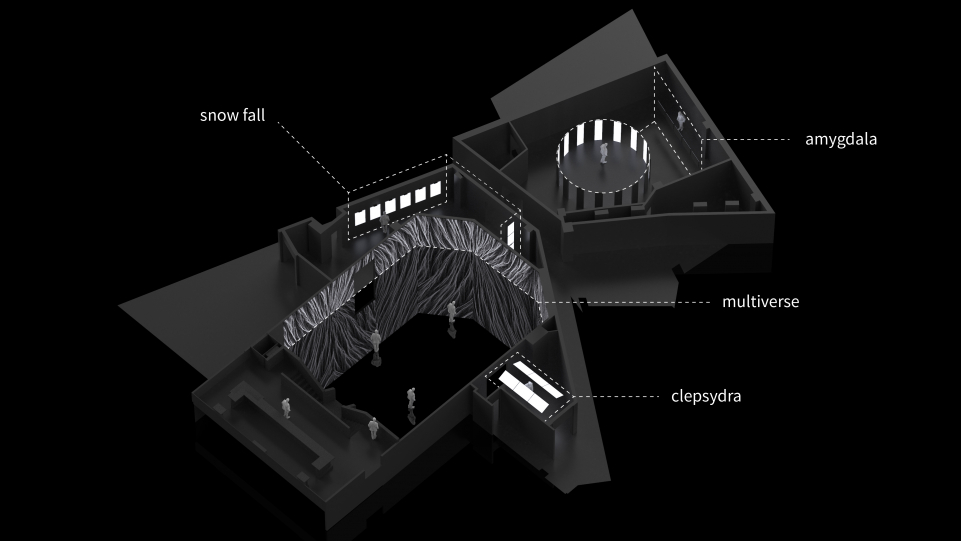 For this particular occasion, the Multiverse setup has been changed to exploit the characteristics of the main gallery. The software has been modified to create a wider simulation covering the entire projection surface of approximately 10 WUXGA in resolution. The sound configuration has been modified to a 7.1 system to better envelope the audience enriching the overall experience. The mirroring effect here is achieved using a particular reflective epoxy layer on top of the floor. 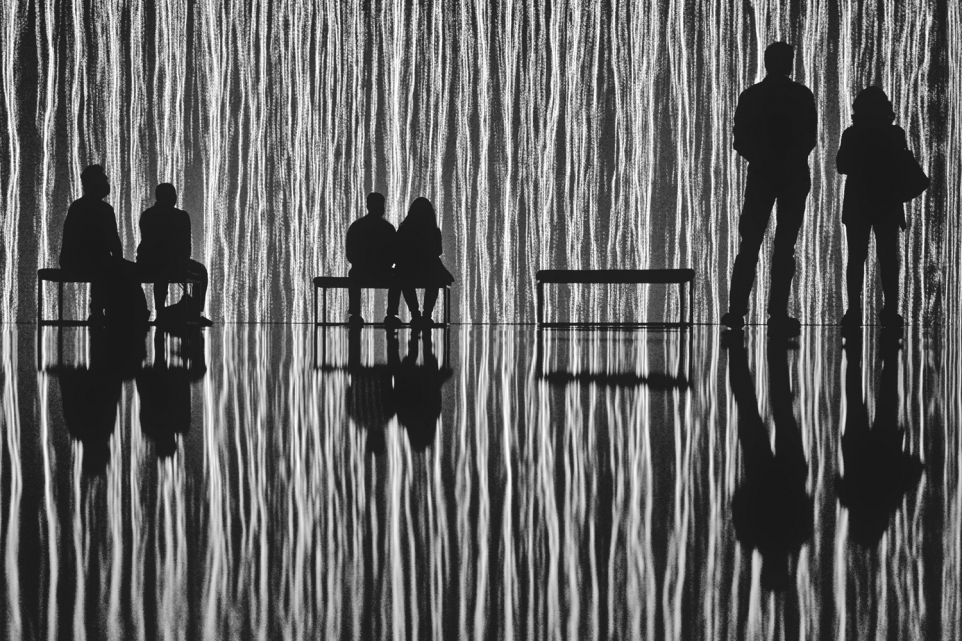 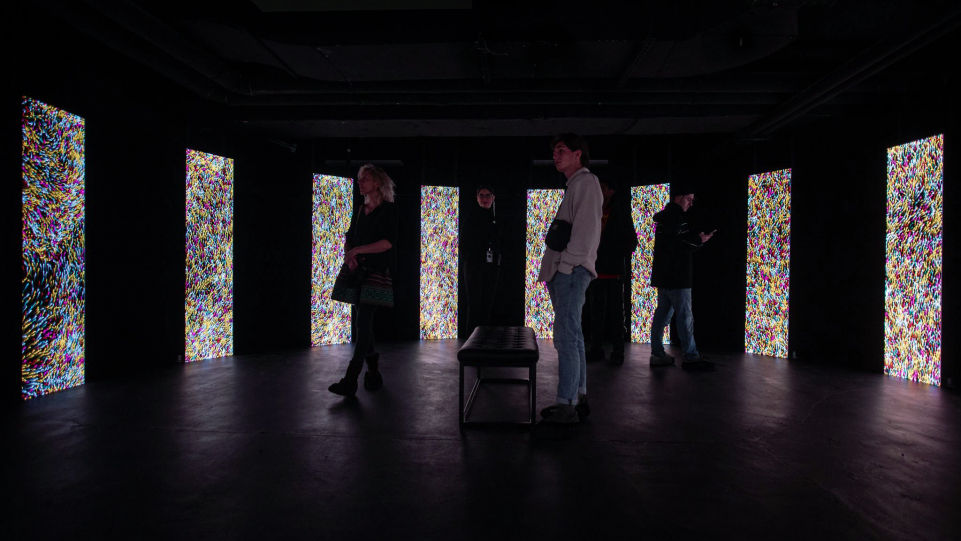 The original double ultra-wide projection here has been redesigned for a much smaller space. In order to exploit the shape of the room, an arrangement was conceived with two sets of three plexiglass panels that act as real projection surfaces. These surfaces, one next to the other, create a unique image. 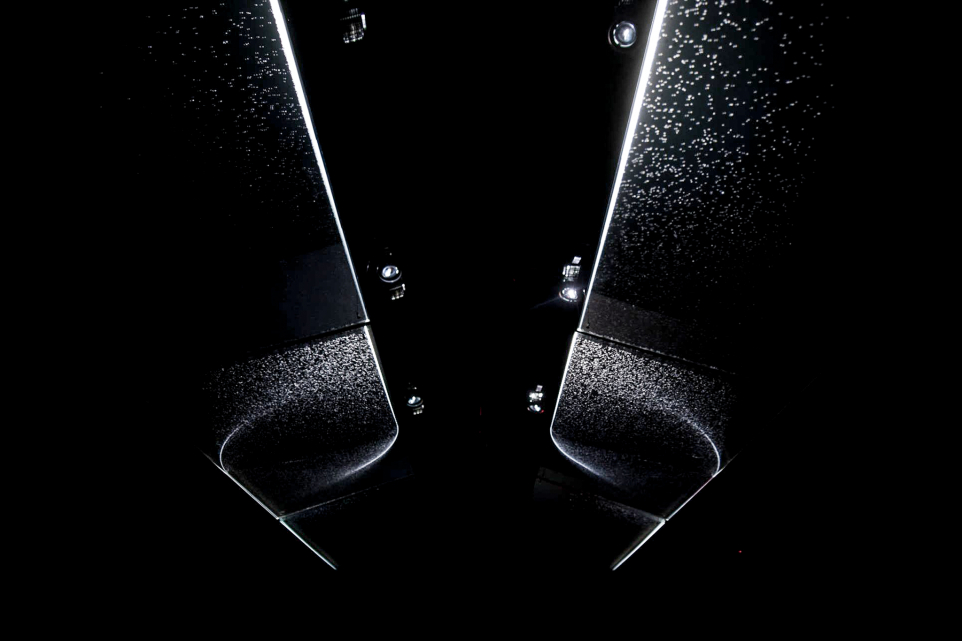 Even in this case, we had the chance to do some minor improvements to the installation by adapting the content to a 4k resolution. Thanks to this upgrade the software has been implemented with the possibility to see a much broader set of details of the audiences face that they were not possible to see before. 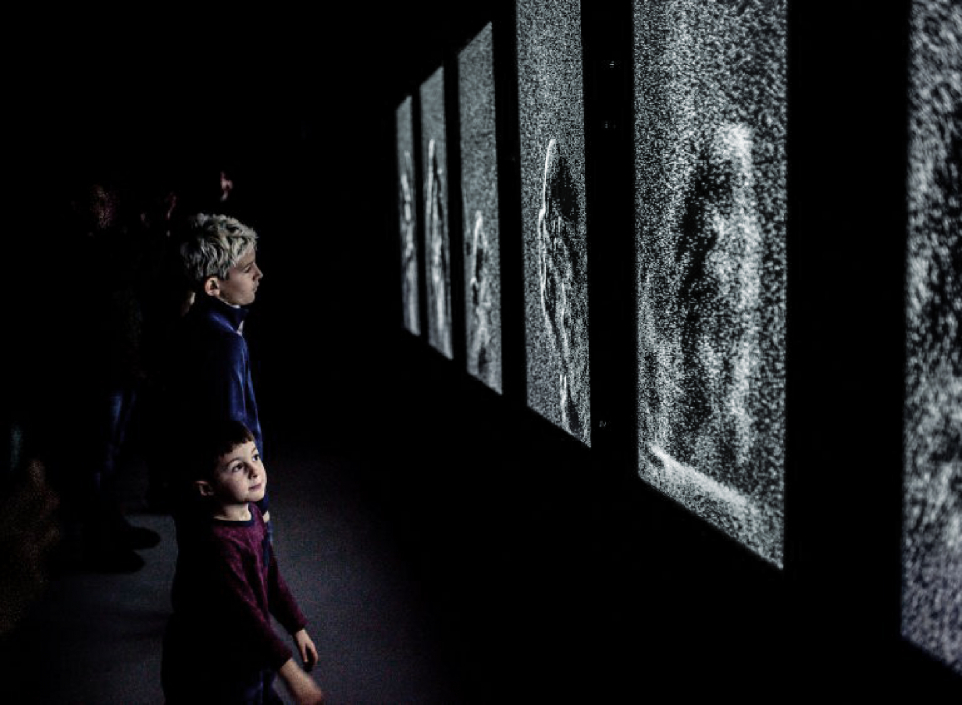